I remember clearly my first experience with a homeless person.

It was dark and I walked up a steep street holding my mother’s hand on my first visit to San Francisco as a little girl. We approached a person crouched in a doorway wrapped in a dirty blanket with shiny, swollen feet protruding out into the cold night air.

I could see he needed help. I remember looking to my mom and asking her if we could help him. I don’t recall what she said but we kept walking quickly away, leaving him in his dark corner all alone. As a child I didn’t understand what I know now as an adult: it’s complicated.

Last year my husband and I and our two teenage daughters moved near San Francisco. We spent the Saturday before Easter hiking the cliffs below the Presidio down to the ocean shore. We ate succulent treats from a local bakery and felt the warmth of family, togetherness, and laughter. We felt joy in the anticipation of celebrating Easter together the next day.

As our day ended, we joined slow moving traffic through downtown San Francisco working our way toward the freeway entrance that would whisk us out of the city. On that slow, stop-and-go drive I was pulled out of my own bliss and into a place of thoughtful compassion. This city that just gave us a beautiful day was also home to multitudes of homeless people. I’d seen them before on other trips to the city.

But driving down the street in slow motion gave me a front row view to their suffering.

Huddled forms in the corners of doorways covered with newspaper. A woman with missing teeth talking to herself as she rearranged bags and blankets around her. People pushed up against buildings, settled on the sidewalks, and staring at nothing. The hopelessness. The grief.

The one I can’t forget.

As I admired the beautiful architecture of a big old church we passed, I almost missed him. But there he was. One lone slumped-over figure sitting on the steps. Head in hands with a thin blanket draped over his shoulders. Defeated. Discouraged. Alone.

For some reason this person pierced my heart and changed me. His image haunts me.

Quickly I snapped a picture before he was gone from my view. I’ve remembered him ever since.

Can you see him there on the steps? Here’s a zoomed in picture.

Who was he? Whose son, father, or brother was this? Was he hungry? Did he have a warm place to go that night? Where would he be on Easter morning?

What could I do to help passing in a car in traffic? How could I help him? So many people and complicated needs. What was the answer? A heaviness settled in my heart the rest of the drive home and I haven’t forgotten.

Friend, have you felt this way too? Seen such need that your heart ached in compassion, but you didn’t know how to help? All those times you wanted to help someone struggling but didn’t know where to start?

I’ve found a simple, safe, and effective way you can help make a difference starting right in your community. It’s called JustServe.org I have found ways to channel that heartache and compassion I felt that day into action that can really help.

JustServe.org is a website that links needs with volunteers. It is a way for you to do good in the world in ways that fit with your schedule and interests.

How does it work?

It’s super easy to find service opportunities close to home. You just enter your city, state, and zip code and a bunch of options pop up that you can choose from. As I sit writing this, 15 volunteer opportunities show up for my city that I could get involved in.

So many opportunities to help! To give relief! To really make a difference!

You find a project that looks interesting to you and that works with your schedule. All the information is given, such as where and when with contact information.

Our family helped at a service day that was posted on the Just Serve website for a youth center that helps children and youth heal from trauma and lead healthy, productive lives. We painted the outside of buildings while other volunteers weeded the grounds, installed a sprinkling system, and built storage sheds. We gathered items and created kitchen kits for the young adults that were graduating from the youth center and heading out on their own.

Although I couldn’t help that lonely young man on the steps of the church that day in San Francisco, it made me so happy to be able to do something to help other troubled young people who, without the help of this youth center, very well could be the next homeless person I might see on the street.

Hey Friend, I invite you to try out JustServe.org and tell me how it goes for you! Every small effort of good we give blesses this world and those living in it. The JustServe.org website just made it easier!

Lessons for Abundance from the Hero Journey
January 16, 2019 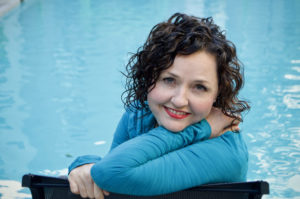 I’m LaRayne and I’m here to help you live life more abundantly. I’m honored you’d spend your time with me! You can learn more about what this website’s all about, a bit about me, and what I know about you